Can a Naturalized Citizen Be Deported?

What Is a Naturalized Citizen?

Can a Natural Born Citizen Be Deported?

As a naturalized U.S. citizen, it’s important to have a basic understanding of what can get you deported. If you want to remain a U.S. citizen and avoid deportation, here’s what you need to know. 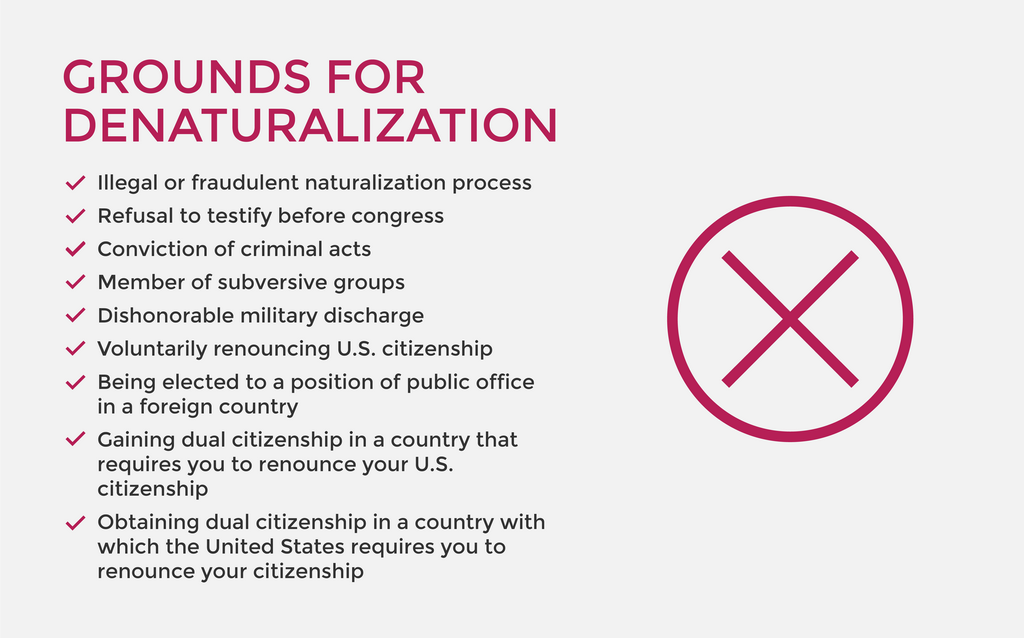 Even if you’ve already been granted U.S. citizenship, you can still face denaturalization at a later date if the information on your application is found to be false. This could be the case if you use a false name or identity, or if you fail to disclose criminal activities during the application process. If the United States Citizenship and Immigration Service (USCIS) finds that you falsified any part of your naturalization application, they may file a denaturalization action against you and attempt to deport you.

Refusal to Testify Before Congress

You can also be deported as a result of being convicted of certain criminal acts. The biggest things to avoid as a naturalized U.S. citizen are aggravated felonies and crimes of moral turpitude.

Crimes of moral turpitude are crimes that typically involve deceit, fraud, or harm to others. These crimes carry additional penalties, including the potential penalty of deportation for naturalized U.S. citizens. If you’re a naturalized citizen, it’s a good idea to talk with a deportation defense lawyer to learn more about crimes of moral turpitude and aggravated felonies.

Membership of subversive groups isn’t a major concern for most naturalized citizens, but it’s something to keep in mind if you’re planning on becoming a citizen.

If you’re a U.S. citizen because of your military service, you need to make sure you serve five years in the military without receiving a dishonorable discharge.

In some cases, a naturalized U.S. citizen may wish to voluntarily renounce their U.S. citizenship, which is an option you have. If you want to renounce your U.S. citizenship, you’ll need to appear in person before a U.S. consular or diplomatic officer at a U.S. Embassy or Consulate in a foreign country, where you must sign an oath of renunciation.

How Does the Deportation Process Work?

When you’re facing deportation as a naturalized U.S. citizen, there’s a step-by-step process you’ll have to go through. So, how can a naturalized citizen be deported? Here’s a breakdown of how deportation works:

If you’re facing deportation, the best thing you can do is hire an immigration attorney to help you understand all your legal options.

Questions About Your U.S. Citizenship? Speak to a Consumer Law Group Deportation Attorney

So, can citizenship be revoked? Even if you’re a naturalized U.S. citizen, you can have your citizenship revoked for certain reasons. As a naturalized citizen, it’s important to understand the law and have an immigration lawyer you can call if you ever run into trouble.